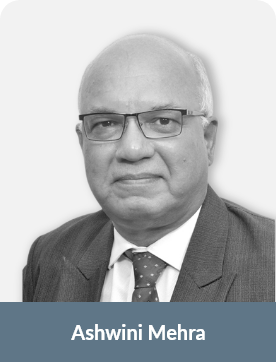 Mr. Ashwin Mehra is accomplished banker with over three decades of experience with State Bank of India, and served as Deputy Managing Director between 2014 and 2016.

Served as Chief General Manager, Bangalore Circle (Head of SBI in State of Karnataka) from September 2011 to May 2014. Took the Bank to the top position in aggregate business & per branch business in Karnataka, even ahead of State-based banks like Canara Bank, Syndicate Bank, SB of Mysore. Successfully implemented all new retail business initiatives of the Bank, including opening of State-of-the-Art SBI inTouch branches at 2 locations.

Served as General Manager of Hyderabad Circle from January 2011 to August 2011 during which period, the focus was on exponential growth of transactions migration to Alternate Channels like Internet Banking, PoS, etc. and on cross selling SBI Life and SBI Mutual Funds products with fair success.

He was also Chairman of the Whole Bank Credit Committee for sanction of large advances. During his leadership at SBI, Bank ascended to No. 1 position in business in Karnataka, despite 5 other PSBs. Established a large industrial projects appraisal cell within Project Finance Special Business Unit in early 2004-08.